Public transportation within the Town of Huntersville and throughout Mecklenburg County is provided by the Charlotte Area Transit System (CATS). CATS service is based upon a nationally recognized ground breaking plan completed in 1998, the 2025 Integrated Transit/Land Use Plan.

This plan identified a desired land use pattern for future anticipated growth and proposed an extensive investment in a rapid and bus transit system to guide that development future. Map T-6 shows this plan.

Formed in 1998, CATS is funded in part by a half cent sales tax on all non-food retail transactions within Mecklenburg County. 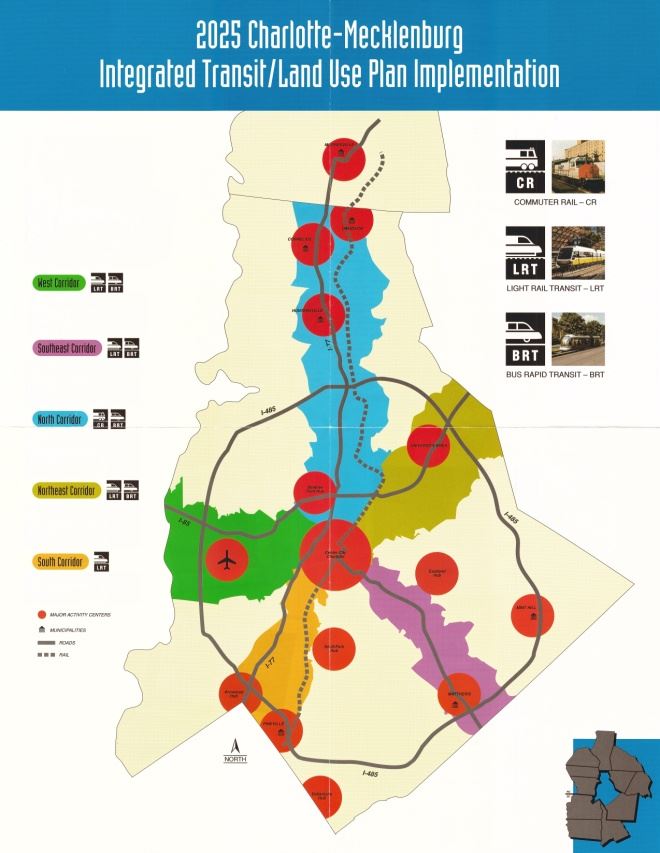 Policy and programmatic oversight of CATS is provided by the “Metropolitan Transit Commission (MTC),” a board made up of the chief elected officials and chief administrative officials from the City of Charlotte, Mecklenburg County, and the Towns of Matthews, Mint Hill, Pineville, Huntersville, Cornelius and Davidson. The NC Board of Transportation also has a representative on the MTC.

Adjacent communities may have non-voting representation at the discretion of the MTC.

Bus transit service is provided under a Countywide Transit Service Plan, updated every five years. Express buses and one local, fixed route bus (known as the Village Rider) serves Huntersville along with a neighborhood circulator system.

As part of the 2030 Transit System Plan, Huntersville is proposed to be served by the North Corridor Commuter Rail Line. The proposed North Corridor Commuter Rail or Red Line as it is referred to, is a new 25-mile commuter rail system operating over existing tracks owned by the Norfolk Southern Corporation (NS) between downtown Charlotte and Mount Mourne, an area immediately south of downtown Mooresville, North Carolina (see Map T-8).

The rail line runs though the centers of downtown Huntersville, Cornelius, and Davidson. Improvements to the rail line would include replacement of ties and rail, signalization, protection of at-grade crossings, and construction of up to 12 stations and a vehicle maintenance facility (VMF). As of 2009, design and engineering of the rail line and crossings is 90% complete, with station designs at 30% completion.

As currently envisioned, trains would run every 20 to 30 minutes during the morning and afternoon rush hour period and hourly during the remainder of the day. The new service is projected to have some 5,000 commuters ride the trains daily to or from Charlotte by 2030.

The vast majority of these commuters currently travel by single-occupancy vehicle along I-77 and/or NC 115 (Old Statesville Road) or U.S. 21 (Statesville Road). The South Corridor Light Rail Line (Lynx) is the only one of the five corridors that currently features active passenger rail service. Opened in 2007, average weekday ridership for the 9.6 mile Lynx system was initially projected at 8,500 passengers, gradually increasing to 18,100 by 2025. According to the American Public Transit Association, average daily ridership figures for the second quarter of 2010 were 21,600.

Estimates show that the Blue Line has spurred over $1 billion in new development in proximity to the line and within the station areas serving the line. An extension of that operation into the University area (the Northeast corridor) is currently in planning and design, and federal funding is anticipated.

Currently, a task force is identifying funding options and is expected to make a final recommendation to the MTC by December 2011. Based on a decision to proceed within implementation of the North Corridor, service could commence by 2017. 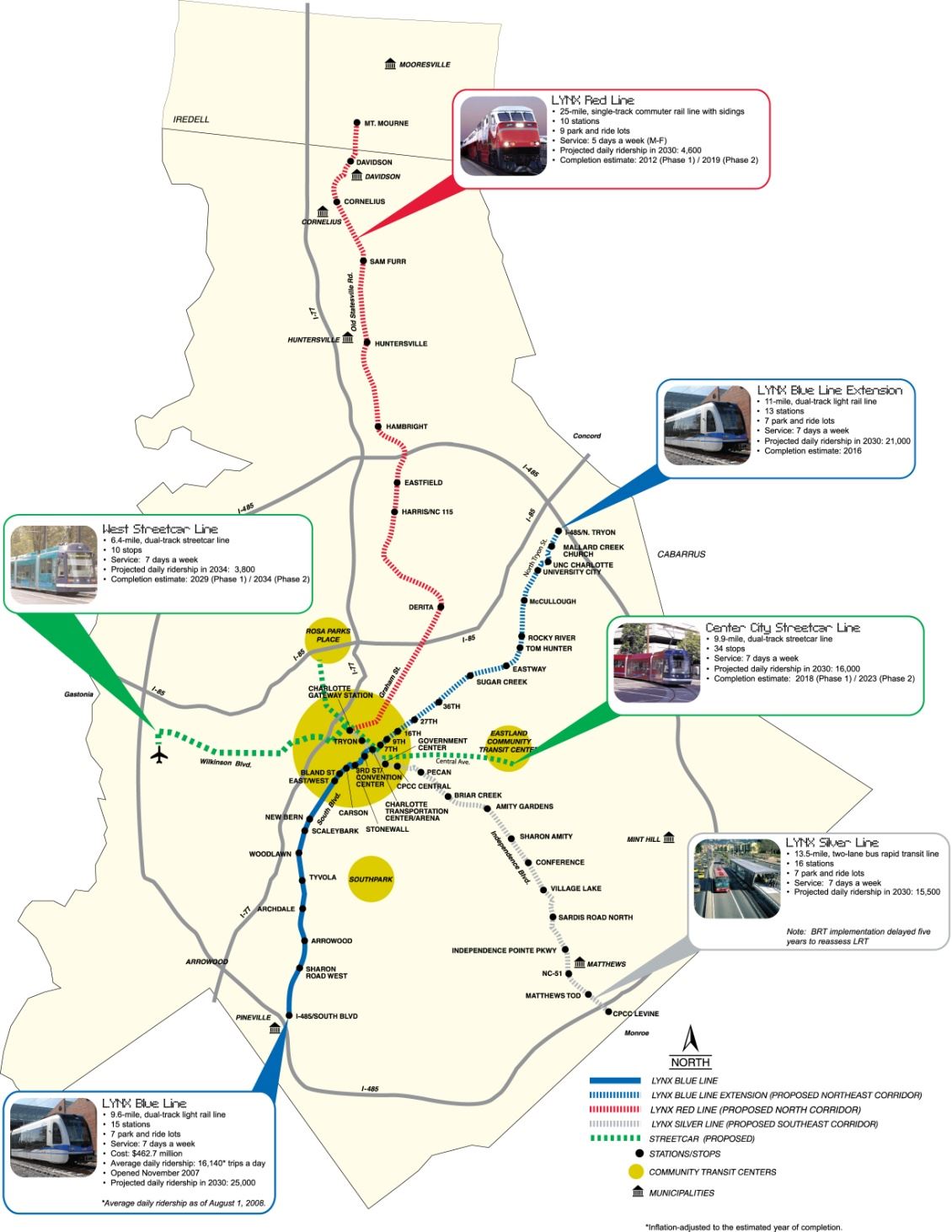