With the adoption of the Huntersville Community Plan in 1995, Huntersville intended development on the eastern and western areas of Town to be different from the conventional sprawl pattern where all useable land is developed into houses, lots and streets with only unbuildable land left untouched (see Figure H-2).

Example of the development pattern not desired in the eastern and western edges of Huntersville.

The Zoning Ordinance was amended in 1996 to promote “…compact neighborhoods that set aside significant natural vistas and landscape features…” consistent with the vision of the 1995 Community Plan. From 1996 until the first part of 2003, the eastern and western areas of Huntersville’s zoning jurisdiction were zoned Open Space (OPS), allowing up to two-and-a-half units an acre plus density bonuses when more than 15% of the subdivision was devoted to open space (see Map H-2, with green area representing the OPS zone in 2002). The OPS zones covered about 58% of Huntersville’s 63 square miles of zoning jurisdiction and allowed single-family homes as well as town homes as illustrated in Figure H-3. 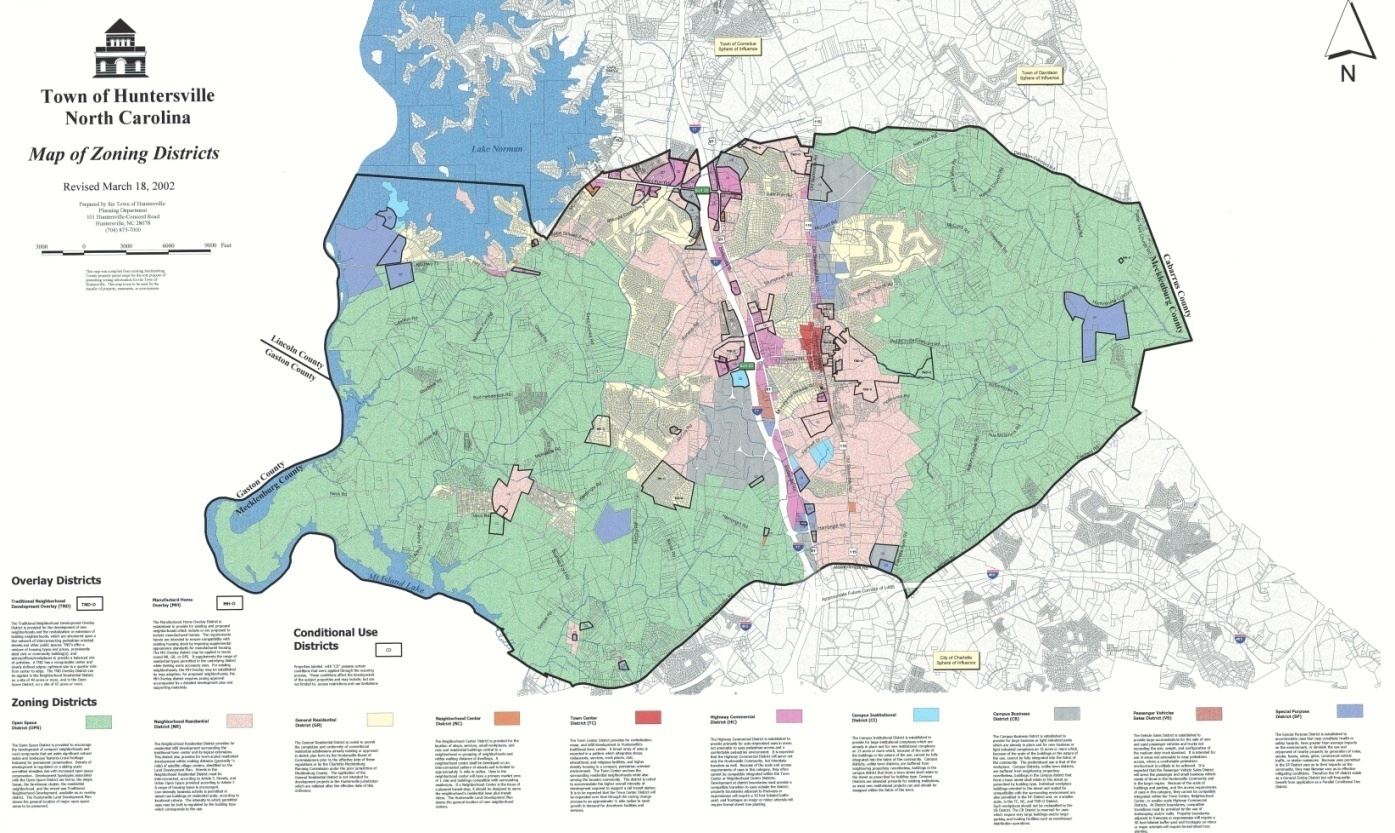 Between 1996 and 2003, a total of 3,705 dwelling units were approved in 17 subdivisions within the OPS zone at an average density of two units an acre. The residential subdivisions approved in the OPS zone during that time period raised community concerns about infrastructure impacts (particularly schools and roads) and environmental impacts (clear cutting of trees, mass site grading, increase in paved area and storm-water runoff, etc.). Responding to those community concerns, the Huntersville Town Board placed a moratorium on new residential subdivisions in 2002 that lasted until the zoning and subdivision codes were amended in early 2003.

Example of density allowed in the OPS Zoning District (2.3 units per acre). Contrasted with the subdivision in Figure H-2, the open space in this development is larger and spread throughout the community. Townhomes and single-family homes co-exist and houses do not front or back-up to state roads where a buffer zone exists.

The Town adopted further density modifications in 2007 to the Rural zone, reducing the allowable density to
approximately 0.6 units an acre, and Transitional zone, approximately one unit an acre. Between 2003 and 2010, a total of 1,598 residential units were approved in 12 subdivisions within the Rural and Transitional zoning districts at an average density of one unit per acre. 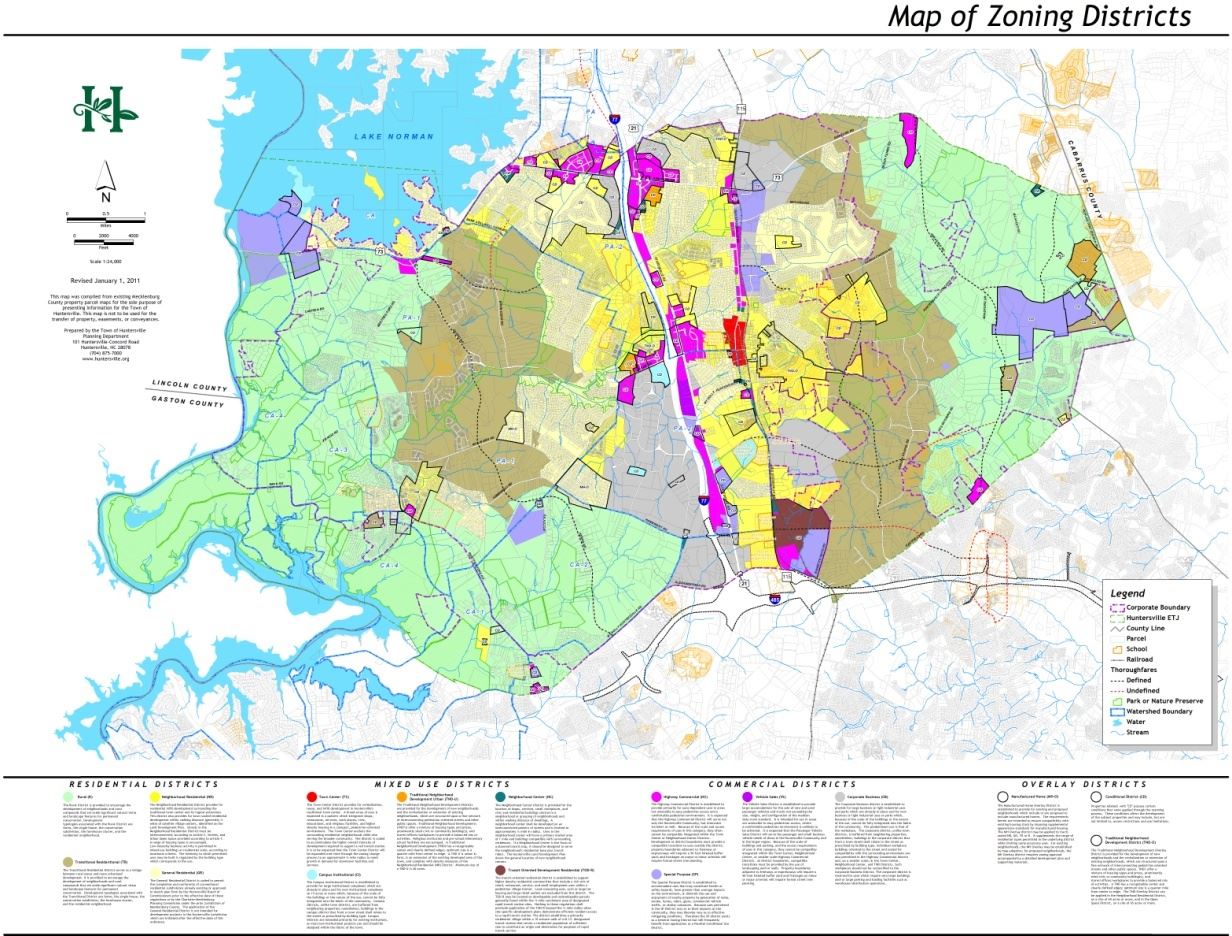 While the Rural and Transitional zones encompass 22,730 acres of Huntersville’s zoning jurisdiction, just slightly over 50% of that area (12,076 acres) is vacant and could be developed in the future (see Table H-7).

Assuming current density maximums do not change (i.e. 0.6 units/acre in the Rural Zoning District and one unit/acre in the Transitional Zoning District), a total of 9,234 single-family lots could be accommodated at future maximum build-out in these two zoning districts (see Table H-8). While it is not likely that all properties will be subdivided to the maximum densities, Table H-8 illustrates the highest build-out potential given current development standards.

As the Town grows and infrastructure is expanded, some portions of the Transitional District and key sections of the Rural District at important crossroads may be rezoned for higher intensity development where they represent logical extensions to existing development or are within mixed-use development nodes identified in area plans.

At this time, it is not recommended to change current density limits in the Rural and Transitional zoning districts.

However, given this period of great change in the housing market, it is recommended the Town revisit development standards within the next five years to determine if adjustments are warranted.

Together with the Rural and Transitional Zoning Districts, the other primary district available for future residential development is the Neighborhood Residential (NR) District (see yellow area, Map H-3). This zoning district has no minimum lot size or lot width. Any lot less than 60’ wide must be served by an alley. Furthermore, no more than 30% of the total housing units within a major subdivision, located outside one quarter mile of a designated transit station, can be attached houses, apartments and mixed-use buildings.

Currently, there are 1,242 acres of land within the Neighborhood Residential zoning district that are not developed. In Table H-9 is a chart illustrating the range in the number of housing units that could be built within the undeveloped Neighborhood Residential parcels, depending on the average density of development. Since there is no minimum or maximum density limits in the NR zone, the number of dwelling units built per acre will vary greatly.

Map H-4 depicts parcels which are five acres or larger and available for development within the R, TR and NR zones. 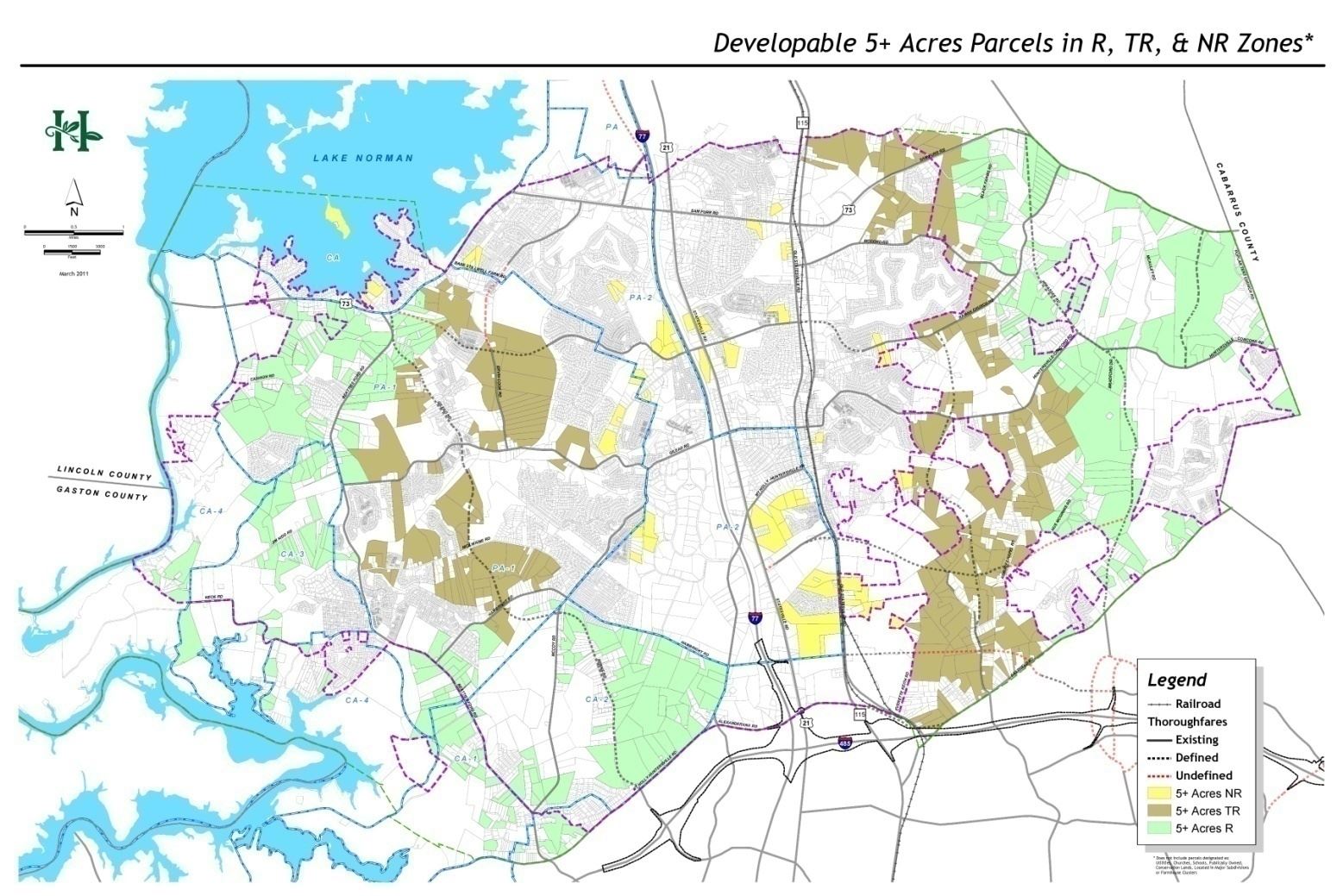