As noted in Table H-2, the number of residential building permits for new homes has dropped significantly since the peak of the housing market in 2006. One of the results of this drop in building permits has been a slower absorption rate for approved, yet un-built housing units. As of December 31, 2010, there were 4,236 approved (un-built) single-family house lots and 3,634* approved (un-built) multi-family units. Single-family house lots include attached (townhomes), detached units and duplexes, while multi-family is defined as three or more units.

(*This figure assumes all 2,305 units approved in the Bryton transit oriented development will be multi-family, however, it is possible that some of these units may be converted to townhomes, which would be classified as single-family units.)

Based upon a 2030 population projection of 89,597 (medium growth scenario) for the Town, a total of 3,670 multi-family units and 13,900 single-family units would be required to meet the demand for housing generated by this growth.

Figure H-1 below depicts the number of approved un-built single-family and multi-family dwelling units as of December 31, 2010 along with the number of units required to accommodate the 2030 medium growth scenario population projection. Based on these figures, by 2030 there will be a need for an additional 9,664 single-family homes to accommodate the projected population growth. For multi-family, there will be a need for an additional 36 units to meet the demand to be generated by projected population growth. It is clear from Figure H-1 that even if Bryton contains a number of townhome units as opposed to multi-family units, there is a substantial inventory of approved multi-family units to accommodate future growth for many years to come. 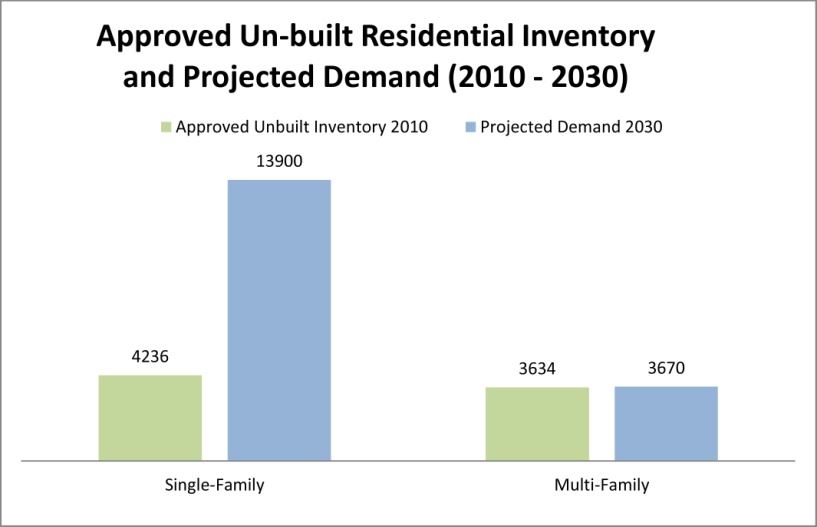 It is also expected that the number of multi-family building permits will increase significantly, based upon existing inventory, market demand and conditions, with a peak time frame between 2015 and 2020.