Huntersville is a part of the Charlotte metropolitan region - one of the fastest growing areas in the U.S Since 2000, Mecklenburg County has grown from a population of 695,454 to a total of 919,628 in 2010, representing an increase of approximately 32%. The NC State Demographic projections show that Mecklenburg County will continue its upward growth rate, with a projected 2030 population of 1,458,192.

The regional presence of Fortune 500 companies is a significant indicator of the area’s economic strength and stability. Mecklenburg County is home to seven Fortune 500 headquarters, ranking it 8th in the country.

The presence of these companies is indicative of the significant employment found within the banking, energy, manufacturing and auto racing-related business sectors.

Prior to 2003, Huntersville did not take an active role in promoting economic development. Job creation and development of business parks were the result of private sector investments. With Huntersville’s prime location just north of Charlotte along the I-77 corridor, that investment was substantial, most notably the Park Huntersville, a 400 plus acre business park owned by the Bank of America’s pension fund.

However, after completion of the Leak-Goforth study in 2002, sponsored by the Lake Norman Chamber of Commerce, the Towns of Huntersville, Cornelius and Davidson took a more active role in charting the economic future of North Mecklenburg. The study looked at economic development prospects and opportunities and recommended an action-oriented strategy to position the area as a viable location for business and industry. The most notable outcome of that study was the creation in 2003 of the Lake Norman Regional Economic Development Corporation (LNREDC) in 2003. LNREDC is funded by the three towns and private investors, and is tasked with expanding North Mecklenburg’s economic base.

In addition to recommending the establishment of an economic development organization, the Leak-Goforth Study identified several areas that were well suited for job creation but were zoned residential. To reserve these areas for future economic development, the Town of Huntersville rezoned just over 1,000 acres from Residential to Corporate Business in three large-scale rezoning requests. Map ED-1 shows the location of those three rezoning areas (R03-09; R06-07 and North Meck Industrial Park, now Commerce Station) as well as significant recently approved, yet un-built commercial and office development in Huntersville. Map ED-2 shows major employment areas in Huntersville.

It is important to note that some utilities are currently not available to all of the major employment areas noted on this map. Therefore, it is important that Huntersville work closely with Charlotte-Mecklenburg Utilities to time planned utility extensions with economic development projects within these areas.

In 2009, Forbes Magazine identified Huntersville as the number two most popular destination to move in the U.S According to Forbes, this designation was due primarily to the presence of employment opportunities. Huntersville’s location immediately north of Charlotte places the town in a very advantageous position for those who wish to live near where they work. 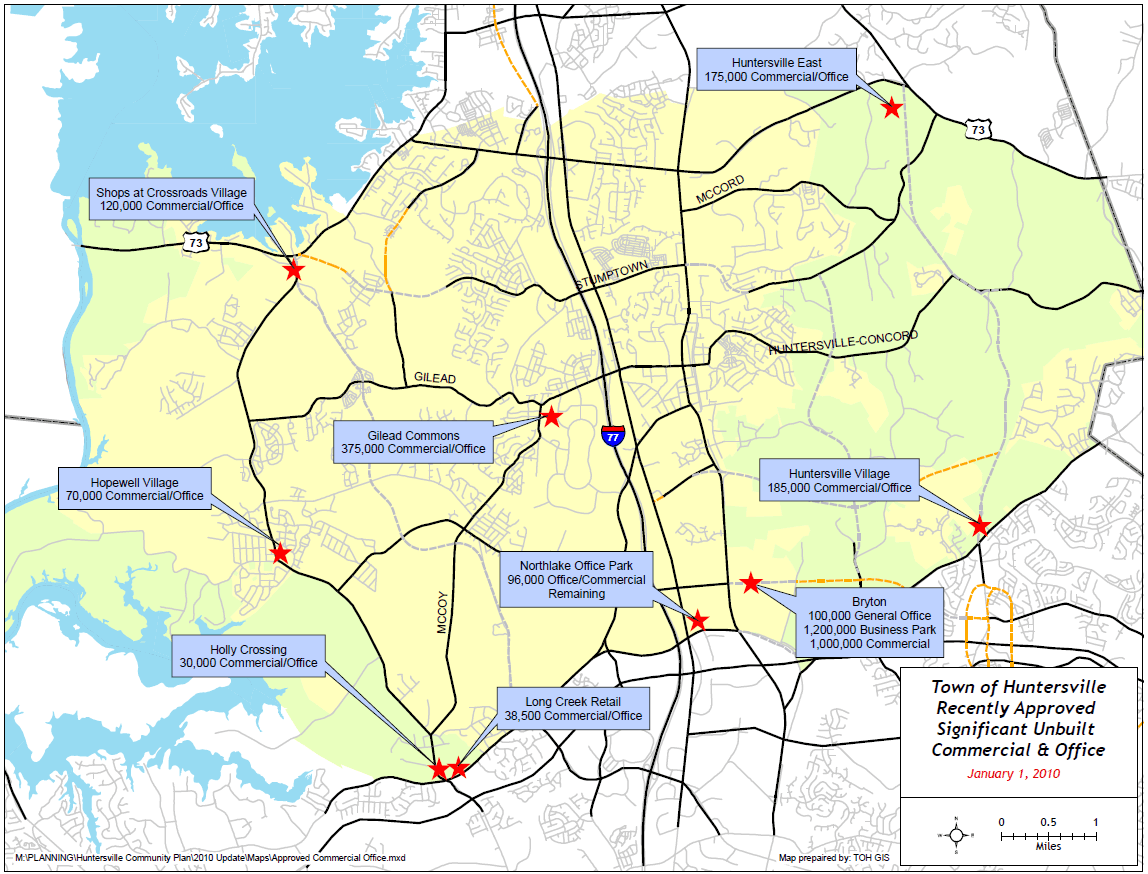 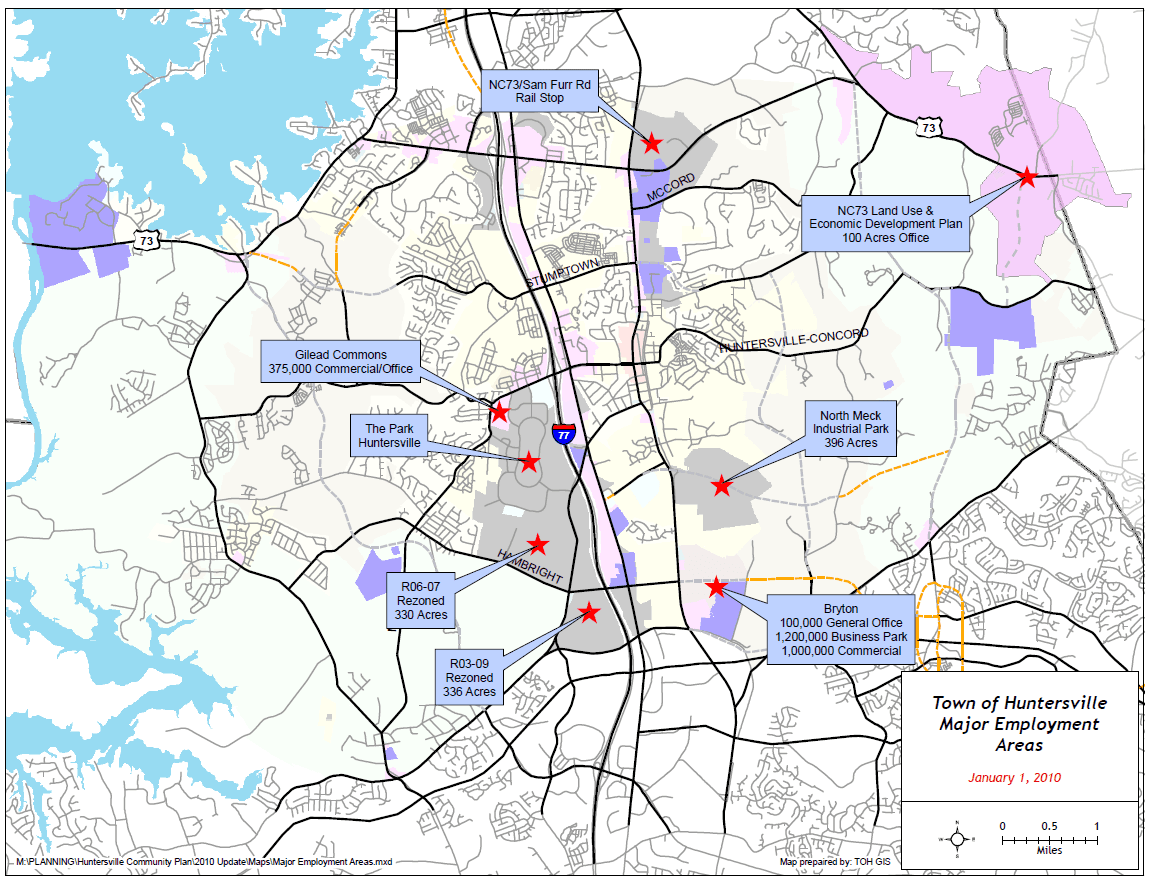 From an economic development standpoint, these factors have helped to draw a number of national and multi-national corporations to Huntersville since the early 1990’s. Table ED-2 lists some of the major employers within the Town as of May 2010.

Economic Development encompasses more than industries located in business parks. It includes the travel and tourism industry as well as large and small commercial and office areas located throughout the community. Since 1996, Huntersville has encouraged mixed-use development allowing people to live, work, shop and recreate in one location. Commercial development is discussed further in Section 6.0.

The Town of Huntersville is an active participant in a number of regional initiatives that have resulted in a positive impact on the town’s local (and regional) economy. In 2005, the Towns of Huntersville, Cornelius and Davidson entered into a unique joint venture to develop an industrial park for light industrial tenants in order to maximize local employment opportunities and allow the sharing of the tax base between all three communities. Commerce Station, a master-planned industrial park, is the result of that joint venture.

In 2005, the three towns purchased 126 acres located on NC 115 in Huntersville and were successful in attracting its first tenant, originally Prairie Packaging but now Pactiv Corporation, which opened for business in 2006. In 2010, ABB, a Swedish based manufacturer of high voltage energy transmission cables, announced plans to locate in Commerce Station. ABB will make an initial investment of $90 million, and employ over 100 at this facility. Commerce Station Business Park is ultimately planned to encompass 350 acres, with the inclusion of adjoining parcels in private ownership.

As previously noted, Huntersville is a member of the Lake Norman Regional Economic Development Corporation (LNREDC), made up of the Towns of Huntersville, Cornelius and Davidson as well as private sector investors. The Town is also active with the Lake Norman Chamber of Commerce (LNC) and Visit Lake Norman (VLN) in promoting the travel and tourism industry in Huntersville.

Another regional initiative that the Town is involved in is the Lake Norman Transportation Commission (LNTC). Formed in 2009, LNTC’s members include the towns of Huntersville, Cornelius, Davidson and Mooresville. LNTC’s mission is to promote transportation solutions for the Lake Norman area, a critical component to the success of recruiting new businesses and expanding existing businesses.

In 2010, LNTC sponsored an Urban Land Institute (ULI) Advisory Services Panel to assess and offer advice and recommendations regarding the economic development potential within the area encompassing the I-77 corridor and North Corridor commuter rail line. The report issued by the ULI Panel contained a number of recommendations, including the following:

Another example of regional cooperation to promote economic development is the construction of the Verhoeff Drive Bridge over NC 115. This $6.4 million project is a joint effort of the towns of Huntersville, Cornelius and Davidson and will provide direct access from Commerce Station to the regional road network, thereby enhancing the attractiveness of Commerce Station to prospective tenants. Regional cooperation will continue to be an essential strategy for the Town of Huntersville to follow as it plans for economic growth and development through 2030.